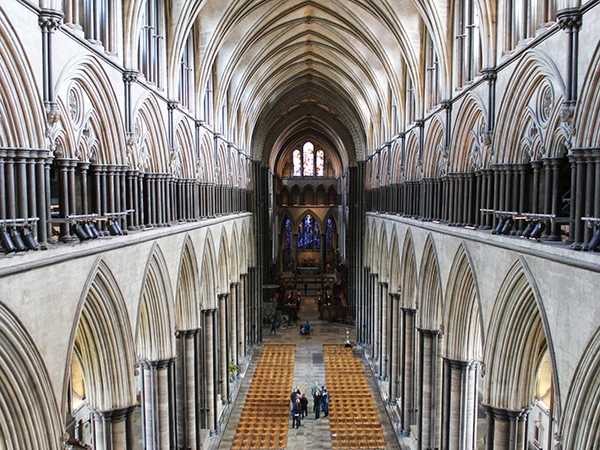 It welcomes some 300,000 visitors each year to its programme of major services, concerts, religious festivals and art installations — or simply for private worship; and within this magnificent Early English Gothic edifice they expect the sound in the reverberant space, with its huge vaulted roof, to be heard coherently and intelligibly.

The last major sound system installation took place in 2000, but with a distribution network using outdated technology, the administrators faced the prospect of an overhaul.

Ed Manwaring (of EM Communications) had been servicing the PA for nearly ten years. “It was clear that a complete change was required.” he said. “The aim was to upgrade an ageing network backbone and, crucially, to vastly improve the speech intelligibility within the Cathedral, made difficult by the enormous reverb decay time in excess of 6 seconds.”

Todd takes up the story. “Despite its age, the original Soundweb system was functioning well except for the maintenance issues expected of a system which has been in use for well over a decade. Ed had been keeping them going with regular support and his challenge now was to create a system using the existing infrastructure while improving the user interface and sound quality.”

A site test of JBL’s CBT (Constant Beamwidth Technology) CBT100LA and CBT70J line array columns with their asymmetrical vertical coverage demonstrated the system’s ability, while addition of the supporting subwoofers showed its potential as a performance system. Previously, the Cathedral had to hire-in systems for music events with limited success due to the dramatic reverberation times.

The use of SMAART demonstrated pattern control consistency and EASE acoustic modelling demonstrated that the new speakers would cover significantly more evenly than the pre-existing install and have the required SPL to handle music events.

A total of 42 JBL CBT loudspeakers were deployed, alternating CBT70J and CBT100LA models. A pair of CBT70JE columns provide extended bass response, whilst JBL PRX718XLF subwoofers are provided for use for performance events.

One of Manwaring’s biggest challenges was fitting the system into an edifice dating back to the 13th century. Under the guidelines of English Heritage he knew that no new drilling could take place. “So I had some mahogany blocks made up to adapt the fixing points to the original system, using the flush mount CBT brackets,” he confirms. “I was also able to use the existing cable, although much less of it.”

The distributed loudspeakers are driven by Crown’s new generation DCi Install Series amplifiers, eight DCi4/600 and two DCi4/300, selected for their efficiency and remote sleep facility. Crown XLS1502 amps power the CBT70J/CBT70JE combination, which is positioned at the front of the Nave.

“The DCi models integrate fully with the Soundweb DSPs in Harman’s Audio Architect software — a combination which has already proven successful in a number of high profile installs,” noted Todd.

Manwaring designed the new audio network into six zones; Trinity Chapel, the North and South Transepts, the Quire, the Crossing and the Nave. They are fed from five rack positions — the main one behind the organ and two in each of the north and south triforium ‘galleries’.

“Everything is then distributed by Dante,” Manwaring explains, “and the advantage of using the BLU Dante devices was in reducing the amount of cables that have been redeployed because everything runs through the three network switches on a VLAN.”

A highly experienced Soundweb programmer, Ed Manwaring rationalised a combination of hand held and wireless mics — each taken direct out into a mic matrix across all the primary zones. “In the design file I have brought everything into a Gated Automixer, designed to replace a standard mixer and to provide a degree of automatic mic mixing with little or no manual input. This allows no more than one mic on at any given time.”

While the CBTs conveniently have a selectable vertical coverage preset board for music/speech settings, Manwaring also had the task of setting the delays and time alignment for sound firing from either direction along the nave. These parameters are programmed in a matrix of delays in Soundweb.

The final piece in the Harman Professional jigsaw is the Soundcraft Performer 3 mixing console which will be used predominantly for live music and ‘special event’ productions such as Salisbury Festival. Aside from the Dante option card, it is also equipped with a MADI card to talk to the Soundcraft Mini Stagebox 32R, which meets broadcast needs by the BBC.

The installation has met all criteria, according to Salisbury Cathedral Floor Manager, Russell Cruse. “It has been a great success in terms of speech intelligibility and clarity. I have received feedback from the guides, vergers and clergy which has all been positive and we’re all very pleased with the results”.

“From an operator’s point-of-view, it is much easier to use given the flexibility that the iPad controls allow. Overall, the whole project has been very successful.”